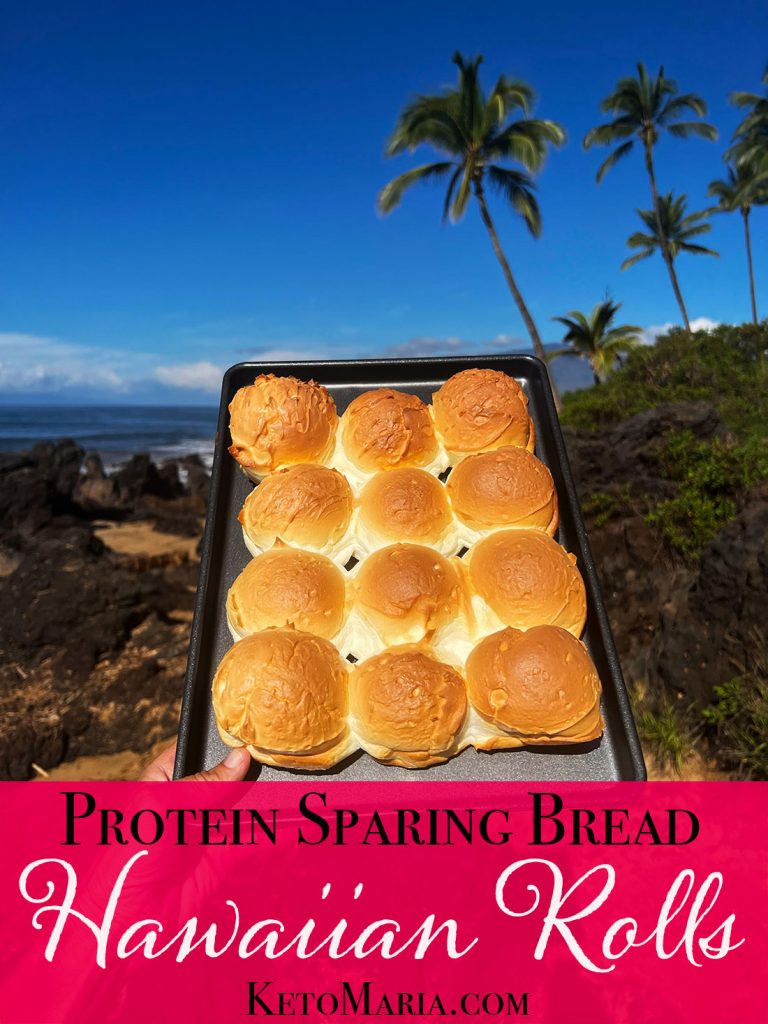 I wrote my protein sparing bread recipe over 15 years ago and I had many variations. Sometimes I added the yolks back in (like this recipe), and in some psmf bread recipes I didn’t. I also used less egg white powder because that creates a softer bread; however, less powder causes the bread to fall if not made properly so I added more egg white powder to my latest recipes in order to help people have success making my protein sparing bread. 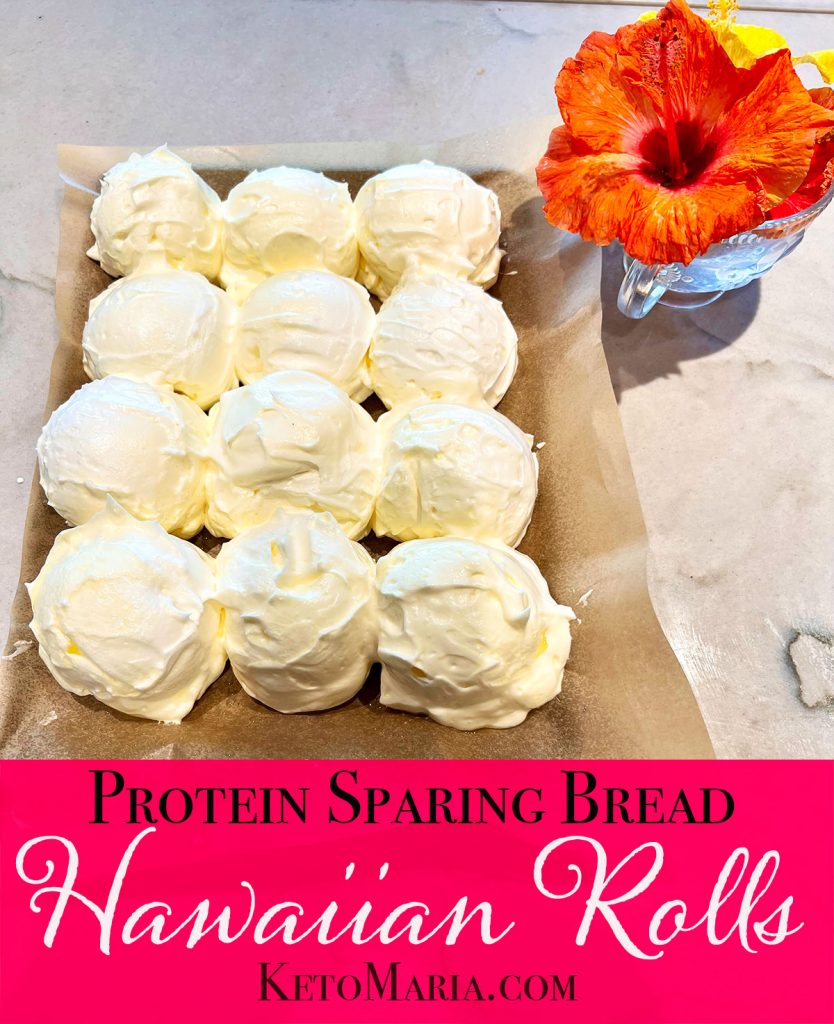 I have also made crouton like in this recipe and even used it as a protein sparing flour or bread crumbs too. You can use this flour for breading on fish or anywhere you would use traditional flour.

But one thing I did overlook and someone on our private Facebook group (which you can join for support HERE) mentioned was a Hawaiian style sweet roll.

As you may know we spend time in Hawaii now (mainly to help limit Craig’s pain when the weather gets cold) so this was a natural fit to our protein sparing bread recipes! 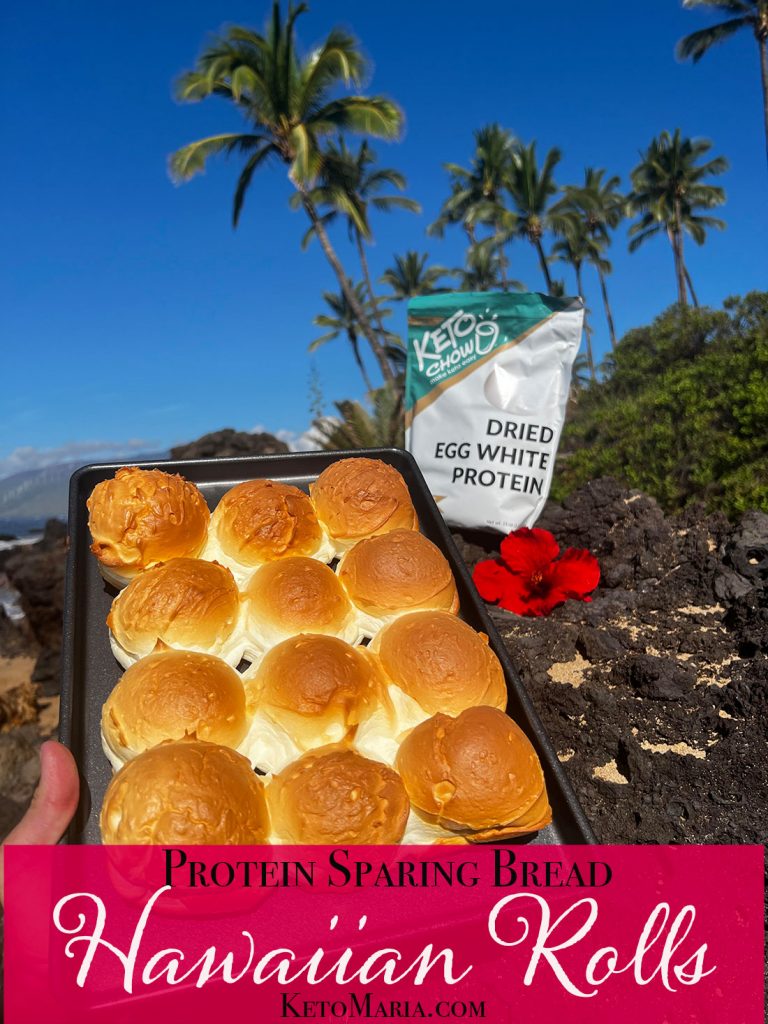 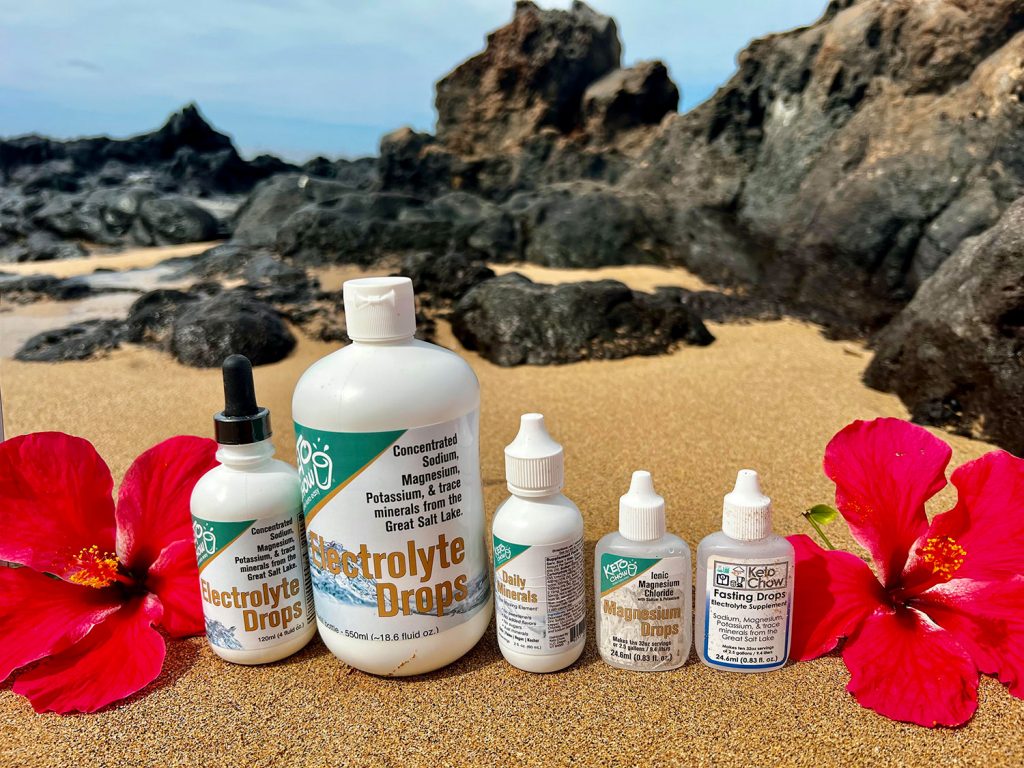 I want to tell you just how special of a company Keto Chow is to me and my keto family!

Keto Chow is owned by Chris and Miriam Bair. Their first introduction to the ketogenic diet was when their oldest son started having seizures. 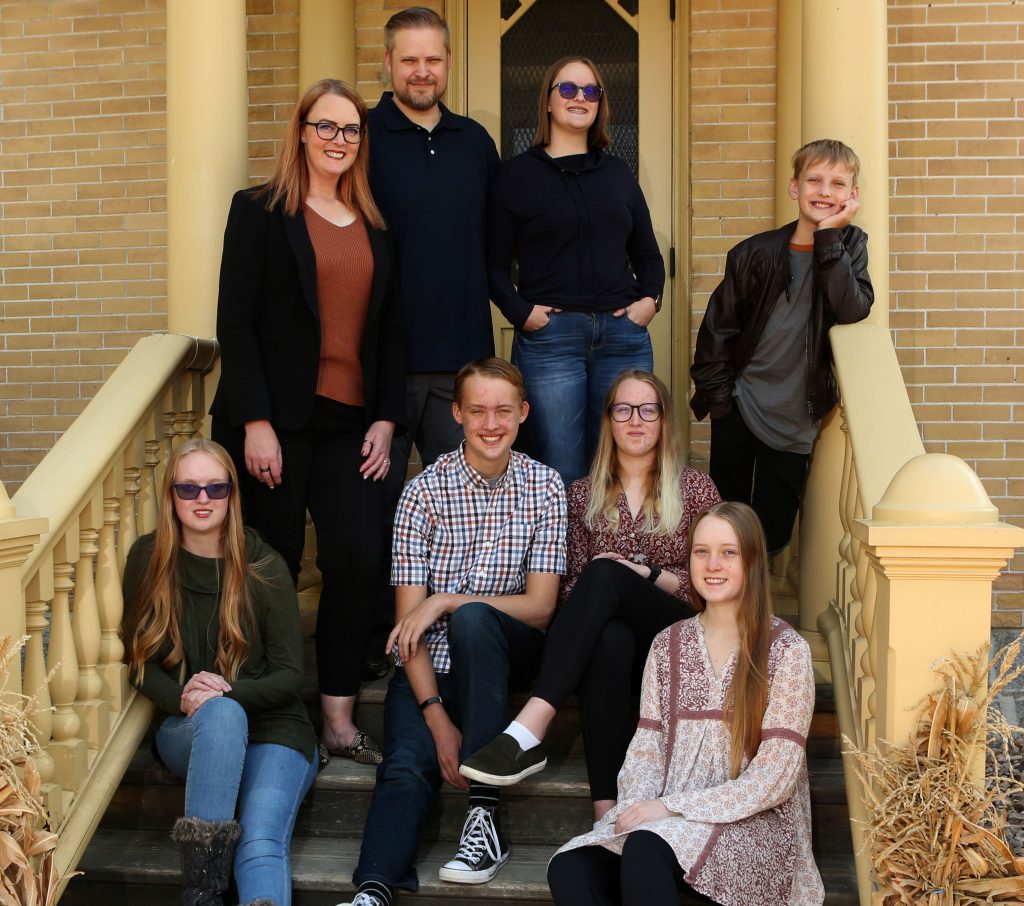 As the Bair’s followed the medical advice that was given to them, they were introduced to keto as a potential last-ditch effort to treat seizures if medication #13 was not successful.

Because that last medication worked, they all but forgot about the ketogenic diet until years later when Chris decided he wanted to lose weight and improve his health. As the Bair family started keto, they quickly realized how effective it was, but it was daunting and time-consuming. 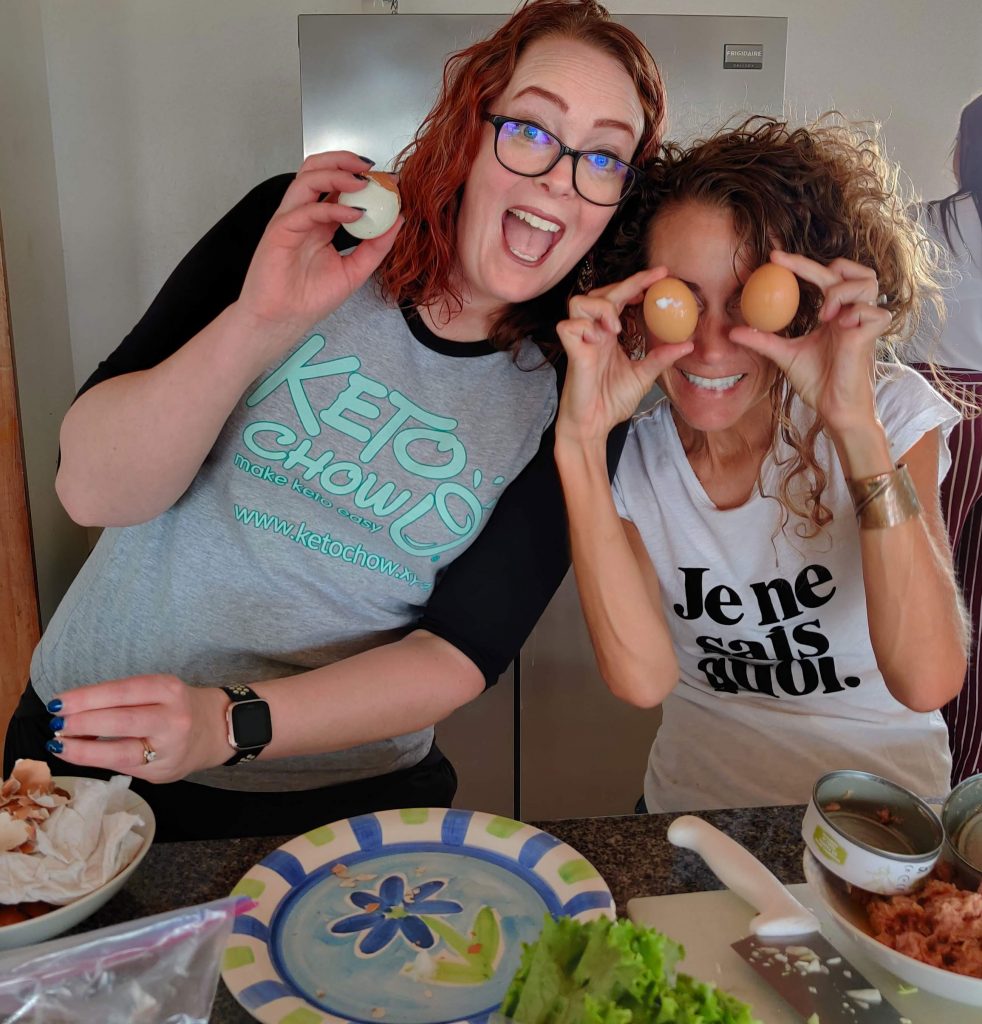 Over the past decade, I have become very good friends with Miriam and Chris! They even took me to dinner for my birthday this past year since I was traveling for work and speaking at Low Carb San Diego! 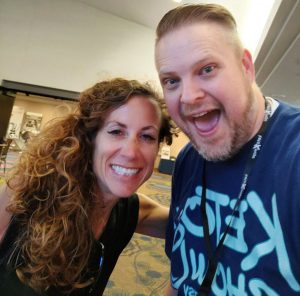 The Bair family is the nicest family I have ever met! I am not exaggerating. The whole family, even their children are super kind! They always have a smile on their faces!

I was so honored that they wanted to create the BEST egg white powder for my protein sparing bread and other recipes like my keto Dutch Baby pancakes with me!

If you are looking for the BEST quality egg white powder to make my protein sparing bread and Hawaiian rolls, I highly suggest ordering a large bag of Keto Chow Egg White powder! And add a bottle of electrolyte drops to your order to help keep you feeling great while you do protein sparing modified fasting days!

Click HERE to support small business and stock up on egg white powder! 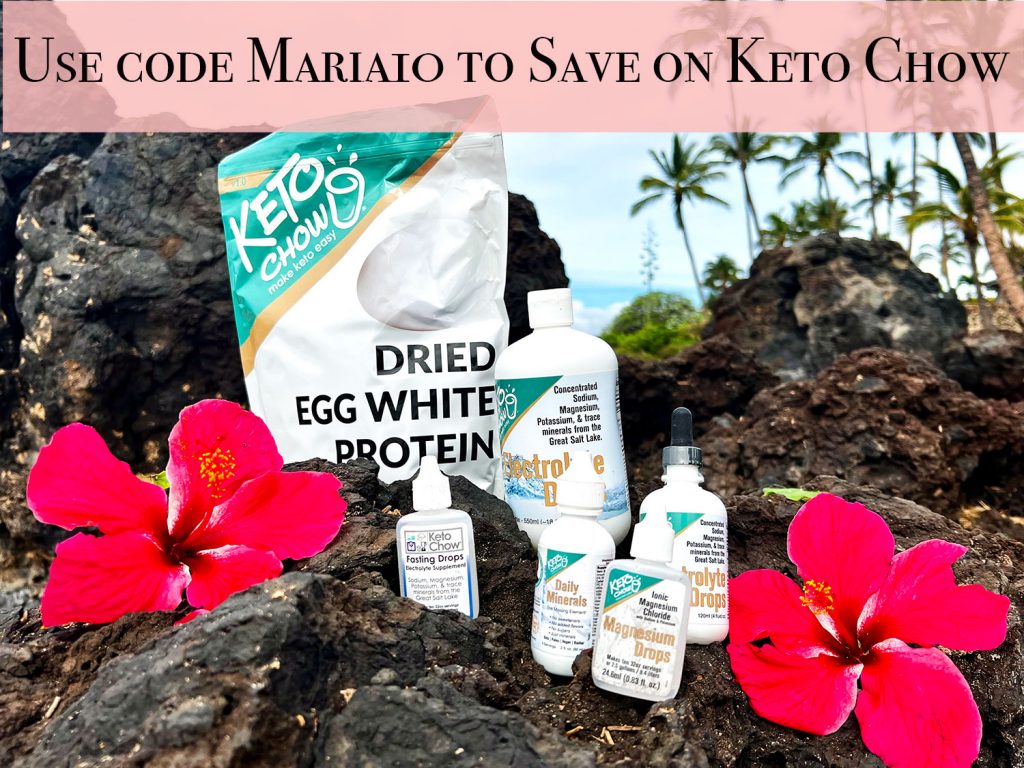 You can make this recipe into donuts! Just substitute the pineapple extract with vanilla extract, add 1-2 more tablespoons sweetener, then bake in a donut or bagel pan!  Top with chocolate, glaze or your choice of topping. Melted the good chocolate makes a great topping!

“Maria Emmerich! Not only is she a blessing, she is so brilliant to say the least. I can honestly say that if I would not have reached out to her I would not be who I am or the amazing way I feel till this day.

Years back… I was not feeling this way.  Aches, pains, inflammation flare-ups non stop and  days I could hardly walk. I was referred to a rheumatologist I was told I have spondyloarthritis. I was prescribed a few medicines and methotrexate being one of them, which I later on learned was the culprit for my headaches, dizziness, nausea and severe fatigue.  Methotrexate is known for other problems it can cause, but I did not and could not stick with it any longer to find out the other damages it would have caused me . And that is all because of Maria Emmerich.  Her wisdom, information and advice is phenomenal

I followed exactly what she advised  me to do to heal all the things that ailed me. Soon after starting Maria’s plan for me, I was able to stop all prescribed medicines from my rheumatologist! And I can honestly say It was because of her I feel like I feel today…which is amazing!

I went to my last rheumatologist with a whole different body so to say.  My Dr. was amazed at the difference he saw in me.  From once hardly being able to move, bend or twist with extreme fatigue to what he was seeing that day was … it was like he was shocked and looked shocked.  His exact words were “whatever you’re doing, keep on doing it”.  And to my shock he was not one bit shocked when I told him I went off the medicines he prescribed me 6 months prior.  He also said “well then you’re the first person I am legitimately taking off those meds.”

And I can honestly say that is all because of Maria and Craig Emmerich! I am beyond grateful and thankful  to then for not only giving me the knowledge and tools I needed to heal what ailed me.” Jennifer 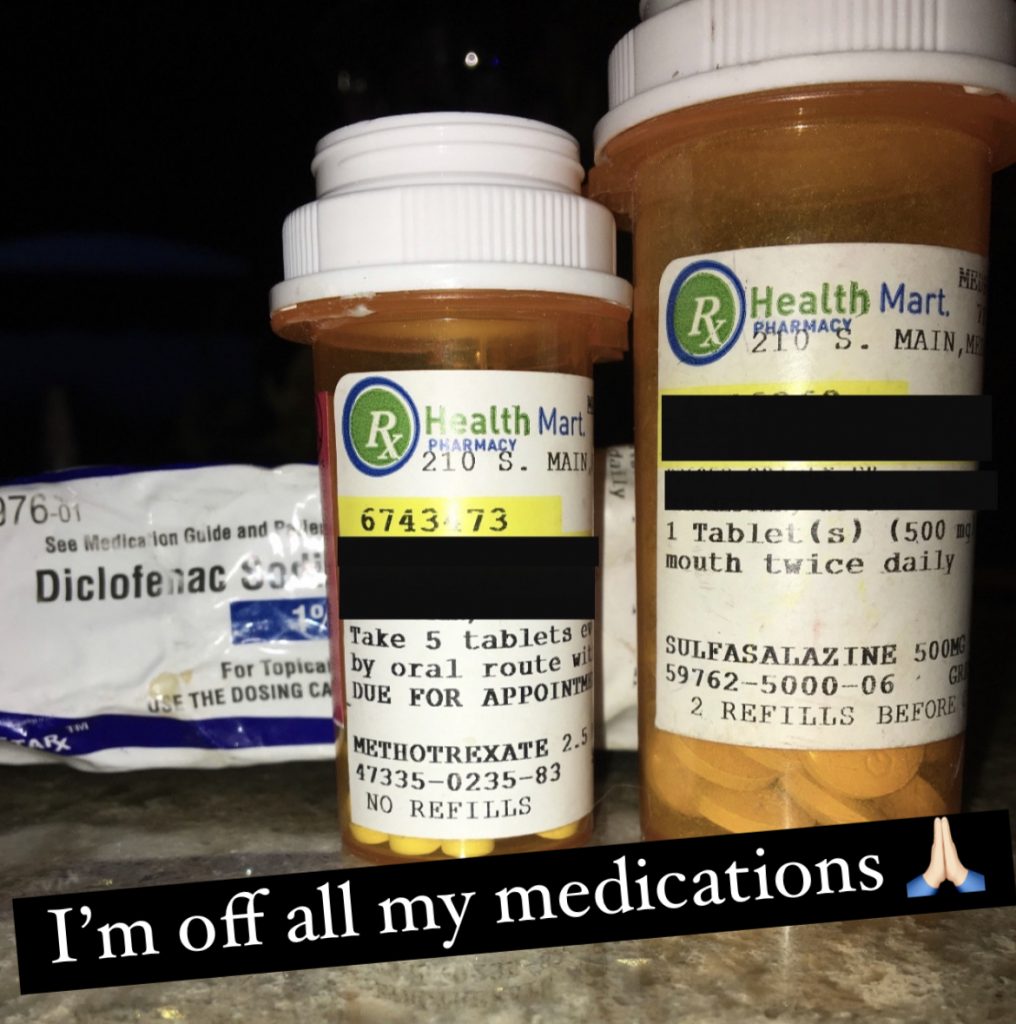