This is such an inspiring and touching testimony!

My son, an adult, had always complained of “gas” from early teens on. He was constantly popping tums, Mylanta, Pepto and eventually moved on to prescription. Then it all came to a head 2 years ago to full-blown SIBO, small intestinal bacterial overgrowth. The pain was unbearable. He is 6′ tall and dropped to 138#’s, was depressed and withdrawn….gave up hope of normal life and really wanted to die. I was terrified of my son’s life!! Doctors got him in this mess in the first place, so health insurance wouldn’t cover anything since it was “pre-existing”! Which was really his saving grace because he had to find alternative healing. I am happy to say he stumbled upon a great natural healing doctor and he’s almost 100% better. He has gained 5#’s which is something to be celebrated. But, what Maria has done with her books and recipes is awesome! Everything in her books is so informative and beneficial. I’m not sure anyone can appreciate her until they have known someone or personally gone through some health or nutritional life-altering devastation! These books and recipes are greatly appreciated by us. It’s helping me to change my own life and I’m slowly changing my daughter and grandchildren over to this better way of eating. My son will always eat this way forever. He will never go back to refined foods and heavy, empty carbs.

Thank you, Belenda! That makes me smile! 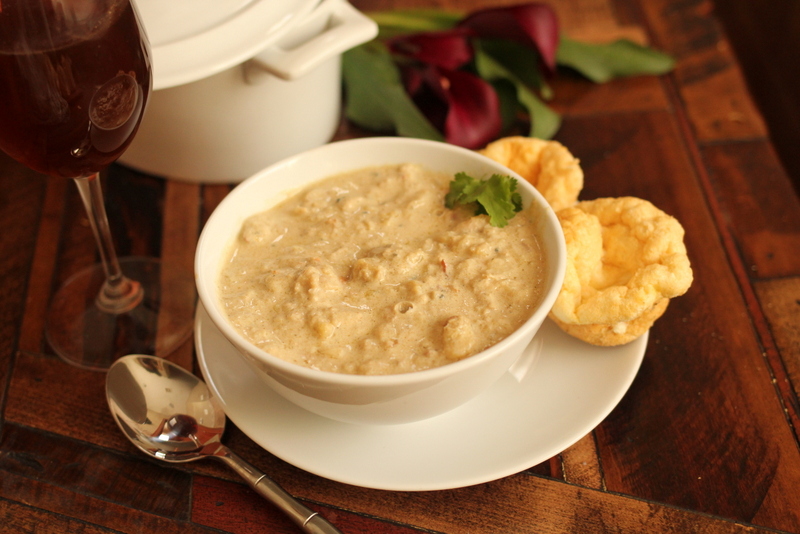 My first taste of real Clam Chowder in a bread bowl was a trip to Monterey California when Craig had to live in that area for work. It was love at first bite! But now that I am aware of how detrimental the traditional chowder is with gluten, potatoes, and starch, I prefer this recipe!

NOTE!  If you are having an issue with a bubble, try weighing your ingredients as listed above.  I use this kitchen scale. 🙂

BREAD BOWL: Preheat the oven to 350 degrees F. In a medium-sized bowl, combine the flour, psyllium powder (no substitutes: flaxseed meal won’t work), baking powder and salt. Mix until dry ingredients are well combined.  Add in the eggs and vinegar and mix until a thick dough. Add boiling water or marinara into the bowl. Mix until well combined and dough firms up.

Divide the dough into 4 balls. Place on a baking sheet and bake for 45-55 minutes or until golden brown.

CHOWDER: Place the butter in a saucepan and heat on high until brown specks appear, making “brown butter.” Turn on medium heat and add the onion, celery and cauliflower (and bacon if using). Saute for 10 minutes or until the vegetables are tender (and bacon is cooked). Add in the broth and softened cream cheese (use a whisk to incorporate the cream cheese or little specks of cream cheese will be in the soup). Season with salt. Add in the clams. Whisk in the psyllium to desired thickness… a little goes a long way! Makes 8 servings. 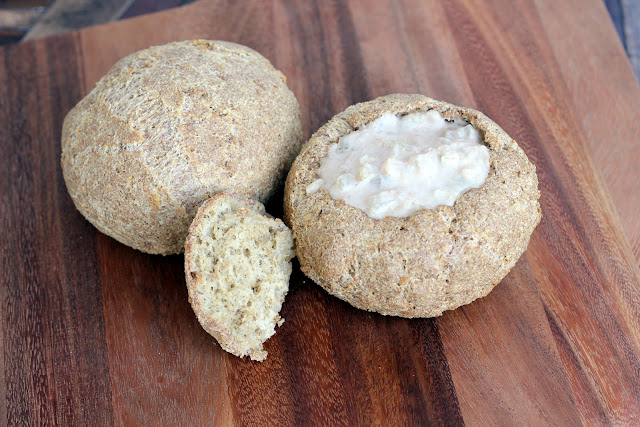