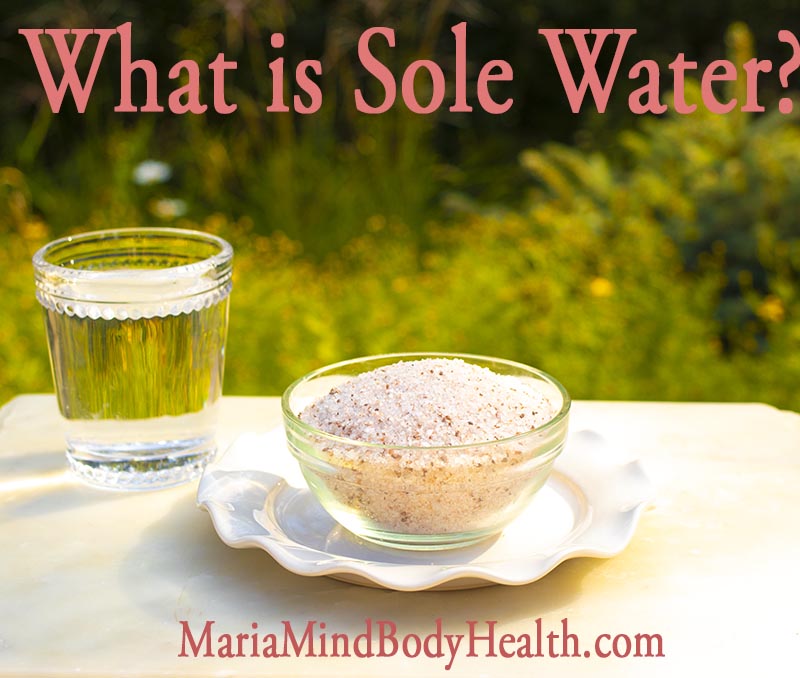 Adding in Sole Water is important when you begin the ketogenic diet because it will help you combat low energy, low moods, constipation and headaches. Instead of adding in carbs for energy, you must think about your diet and energy differently.

Within the first two to four days of lowering your carb intake to below 20 grams a day, you will start showing elevated blood ketones, which marks the start of your body utilizing nutritional ketosis (and lipolysis) and shifting its primary fuel source to fat. However, you might have issues with energy, moods, headaches, or other common “keto flu” symptoms. To combat the symptoms  of keto flu, you first must make sure to keep your water and electrolytes up; this is why Sole Water is so important. When becoming keto-adapted, your kidneys release much of the salt (and associated water) that they hold onto with  higher-carb diets. You need to add more water and electrolytes (Sole Water) to ensure that you don’t get dehydrated. You also might want to reduce your workouts and activity levels during the first couple weeks.

A well-formulated ketogenic  diet requires getting enough electrolytes and water (Sole Water). It is an important part of becoming keto-adapted, especially in the first few weeks after making the switch to keto. If you do a carb-up, that will make  you retain water (carbohydrates make you retain water) but won’t fix the problem of electrolyte imbalance.  CLICK HERE for more on carb ups. Let’s take a deeper look at electrolytes and their benefits.

Even if adapting to a keto lifestyle doesn’t cause any obvious side effects, you need extra water and sodium. Eliminating packaged foods will likely deplete a lot of the sodium from your diet. The recommended foods for the keto diet don’t contain a lot of liquid, so you will want to drink at least half your body weight in ounces of water every day. If you suffer the fierce headaches that some people get when beginning a low-carb diet, add sodium.

We suggest throwing out your regular table salt and replacing  it with a quality mineral-rich sea salt like Redmond Real Salt. Redmond Real salt is essential for electrolyte balance and will give you energy. After a few months of using Redmond Real Salt salt, you will likely find that table salt has a
chemical-like taste.
It’s not necessary to use these Celtic or Himalayan salts sparingly, either. Redmond salt is harvested from ancient sea  beds with a high mineral content.
They contain about 70 percent of the sodium in regular salt (which has been refined, bleached, and processed until it is pretty much pure sodium chloride, often with anti-caking agents added).
The other 30 percent consists of minerals and micronutrients  (including iodine) found in mineral-rich seas. In terms of taste, we greatly prefer these salts to regular salt; they are well worth the extra cost. Do not make the mistake of using sea salt containing dextrose, which is added as an anti-caking agent and is a form of  sugar!
The chart below shows the relative risk for  cardiovascular events for different sodium intake levels. As you can see, the lowest point (lowest risk) is around 5 grams of sodium a  day, which is about 2 teaspoons of sea salt (salt is about 40 percent sodium by weight). As much as 8 grams of sodium is still less risky than only 1 gram. This is why we recommend a daily goal of 4 to 6  grams of sodium, or about 2 to 2½ teaspoons of salt. This amount includes what you put on your food. 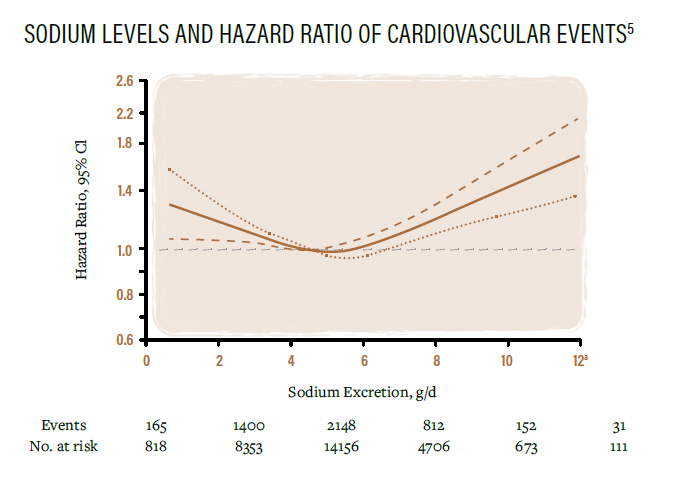 READ MORE ON ELECTROLYTES in Keto: The Complete Guide to Success on the Ketogenic Diet. 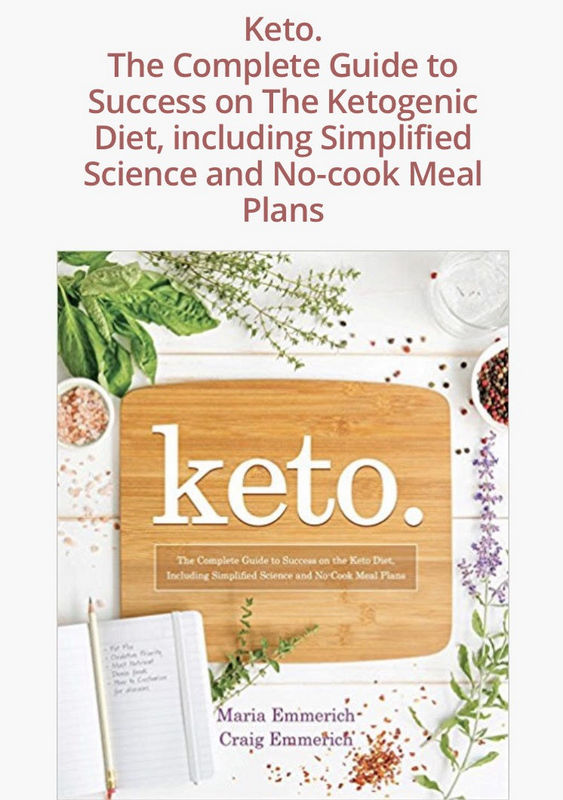 Salt may seem like a minor ingredient in your cooking but once you start using a quality salt filled with minerals, you and your dining companions will notice a difference in the flavor of your food. Even though it is a small part of your cooking, salt can take your cooking to the next level!
I always use Redmond Salt for a few reasons.
Many times salt has anti-caking agents added to it such as dextrose, which is another name for sugar. Even sea salts are often devoid of essential trace minerals. Not to mention, many sea salts are contaminated with micro-plastics.
Redmond Salt is found in central Utah, deposited from ancient sea. Redmond salt is made any heating processes, no additives or chemicals. The lovely pink color come from over 60 natural occurring pink trace minerals. 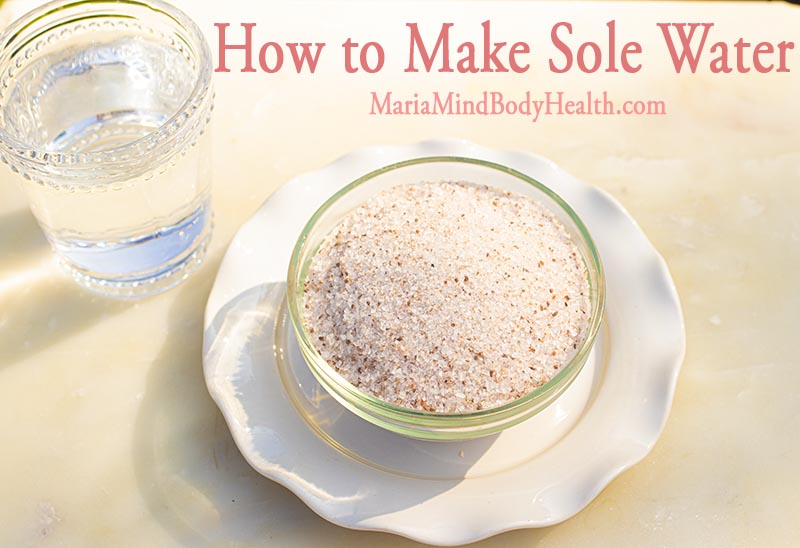 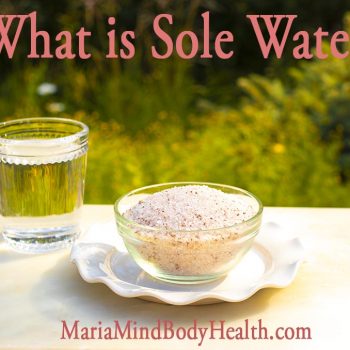 “Thank you Maria! I am a diabetic and have been struggling for years to get it under control, I have been on tons of med’s that made me sick and then I just gave up.

Well I found a new doctor and she recommended your “Quick and Easy Ketogenic Cooking cookbook”. Now I have tried just about everything but only lasted a few weeks to a couple of months.

So I thought OK, well when I started my A1C was 10.3 and my cholesterol was off the charts. So I am now in this for 4 months and just got back from the doctors. My A1C is 6.7, I’ve lost 8 pounds and my cholesterol is only a couple points out of range from being normal. To say the least, I am stunned. I feel great, and ready to reach my next goal.

I love your recipes and your video’s. Keep up the good work, we need more people like you to guide us in the right direction and get healthy.” – Debra 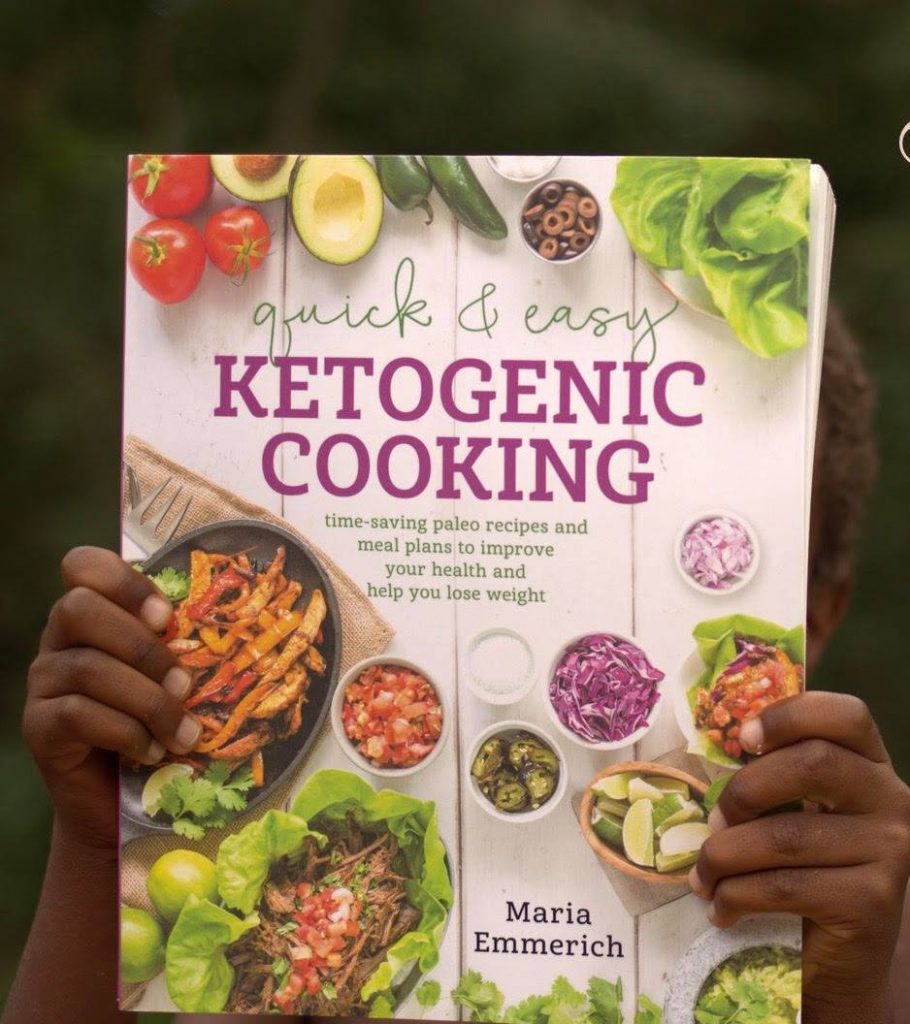