We get asked over and over about starvation mode. This is the idea that if you restrict calories your body “gets used to it” or “thinks this is the new normal” and then holds onto the calories so you preserve them since calorie intake is low even if you are eating in a deficit. What I find interested is that many of these same people then advocate doing 3 or 5 day fasts. If starvation mode was real, wouldn’t the ultimate starvation (no calories at all or fasting) result in the worst case scenario for starvation mode completely shutting the metabolism down and not allowing you to burn any fat? Of course it doesn’t. We talk about why starvation mode is a myth HERE.

Metabolic adaptation does exist though. Let’s talk about how and why that is different than starvation mode. Metabolic adaptation is where the body will reduce its metabolic thermogenesis based on reducing calories in the diet for extended periods. Your BMR or basal metabolic rate is the amount of calories your body needs each day to live in a state of rest. Our bodies need energy every day to fuel cells, do autophagy, build and repair muscle and other tissues and all the things that keep you alive (heart beating, breathing, etc). 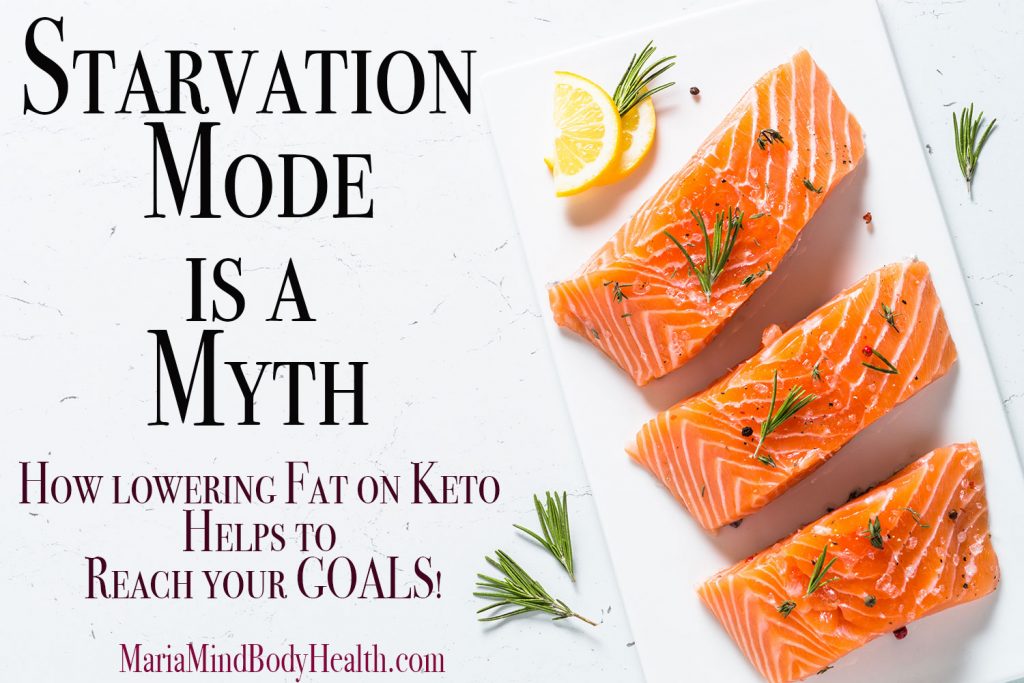 This is where overfeeding days can be a good idea to help limit the metabolic adaption. We have always promoted implementing an overfeeding day occasionally to help reduce any metabolic adaptation. This is something we tend to have clients do based on their bodies needs adding them occasionally when they have extra hunger. An overfeeding day is a day of maybe 400-600 extra calories of fat and protein (not carbs). Doing this every other week, or even every week can be helpful for those in a long term deficit (weight loss for months) while others need to keep to once a month or so for best results. But in general just go by your body. If having extra hunger one day, add extra protein and fat. But don’t make it an everyday thing as that will limit your weight loss results.

The difference between metabolic adaption and starvation mode is that starvation mode claims there is some level of calories (1200 or whatever) where the body freaks out and refuses to lose weight or even starts gaining weight. If this was true, we would never have famine like in Ireland in 1845 where many people were very calories restricted for long periods and got very skinny. In these famine conditions wouldn’t the body “hold onto calories” even more? And if this was true, there wouldn’t be studies like this where one group ate 1200 calories and the other ate 420 and the lower calorie group lost 91% more weight. (source) Then there is the harshest starvation diet of them all where in 1973 a man fasted for 382 days. (source) Not only did he consistently lose weight throughout (about 0.33 kilograms per day) but his weight never really rebounded, and he didn’t gain it back. We aren’t recommending this to anyone. In fact, we actually don’t recommend anyone fast longer than 24 hours if weight loss is the goal as you lose lean mass and a PSMF gives you most of the benefits without the loss of lean mass. But it does demonstrate that starvation mode is a myth. The idea that your body will hold onto stored fat even if eating in a deficit just isn’t true.

Another claim is that if you go to say 1000 or 1200 calories you start to lose muscle. This will only happen if the calories you are eating are primarily coming from fat or carbs. If you get enough protein (hit your protein goal for the day) you will not lose lean mass. This is another reason that PSMF works so well. You get enough protein to preserve lean mass, but you restrict fat and carbs so much you force your body to tap more of its own fat stores for fuel which means more fat loss. You get the benefits of long-term fasting (weight loss) without the negatives (losing lean mass).

We see time and time again on our group where someone has their macros on point, getting enough protein, limiting fat and carbs enough but are stalled and the first things people comment is “you need to eat more”. The idea that you can lose more weight by eating more calories every day just doesn’t make any sense. How well did that work over the last 20 year that made you put on the extra weight to begin with? Instead, add one over feeding day and then later in the week add 1 or 2 PSMF days. That will give you the results you are looking for while limiting any metabolic adaptation and preserving lean mass.

At this point you might be saying, “But it happened to me. I can only eat 1500 calories now or I gain weight”. On average people underestimate the calories they consume by about 40%. Studies like THIS have shown this with self reporting calories. Participants under estimated calories consumed by 47% on average and over reported activity by 51% on average. If you weigh your food and count every gram, that 1500 calories is probably more like 2000 or even 2500 calories. This is quite common and feeds into the myth of starvation mode. We see people posting “Here is my day, it was about 1500 calories” and it is 4 meals with a dessert that is at least 2500 calories. 2500 calories for a typical woman that isn’t very active would be a weight gain level in most cases. But they spread the myth that “starvation mode from doing 1100 calories means I now eat 1500 and gain weight” when in reality, they were eating far more than that because they were not accurately weighing and tracking their food. Eating this way, you eat very nutrient dense foods like animal proteins which can look like a lot less food than the processed foods in a standard American diet. But you get so many vitamins and minerals eating this way because the food is so nutrient dense, so the volume is less even though you are getting more nutrients. This can also lead to a skewed view on what you are really eating.

The truth about metabolic adaptation is this. Yes, your calorie expenditure will slow down some when you lose weight and thus you need to eat less to maintain. But it isn’t due to “starvation mode”. Just think about losing 100 pounds, that is 100 pounds you don’t have to carry around all day long. And all those tissues (fat cells) that don’t need energy all day long and aren’t needed anymore. It’s like exercising with a 100-pound backpack versus exercising without the extra 100 pounds. The energy used to work out with that extra 100 pounds is huge! So, having to carry around 100 pounds less weight all day long will naturally require less calories to maintain your new weight. But that will happen no matter how you lose weight.

Restricting calories a lot (like under 1000 calories a day) for months and month can result is some incremental reductions or metabolic adaptions to the metabolism. But that is where over feeding days will help reduce those effects. Adding overfeeding days limits the metabolic adaptation and keeps the metabolism going. We made these new Cleanse plus PSMF meal plans that include overfeeding days as a great example of this HERE. But, if weight loss is the goal, never eat if not hungry. So, doing overfeeding based on your hunger signals instead of planning them on a specific day can be a better strategy. But if you simply don’t ever get hungry and never get increased hunger days, add an overfeeding day occasionally to prevent too much adaptation.

This will happen with any weight loss, regardless of the diet used to lose the weight; low carb, low fat, or any method of losing weight. So, the choice is to stay obese and suffer the consequences of that obesity. Insulin resistance, high blood pressure, higher fasting insulin and the myriad of health problems that come with obesity. Or to lose the weight and as a result of not having to carry around all that extra weight all day long, eat slightly less calories in maintenance. What this points out is the need to see this as a lifestyle, not a diet. That is how you succeed long term. Thinking you can lose the weight with keto and then go back to your old habits that made you gain the weight in the first place, without gaining it all back again, is just not reality. You must stick with this lifestyle long term and find ways to enjoy the foods you love while keeping on track. That is what our cookbooks enable you to do. I have just about every recipe you can image made into a healthified version. So you can indulge in family favorite recipes while staying on track and making this a lifestyle. 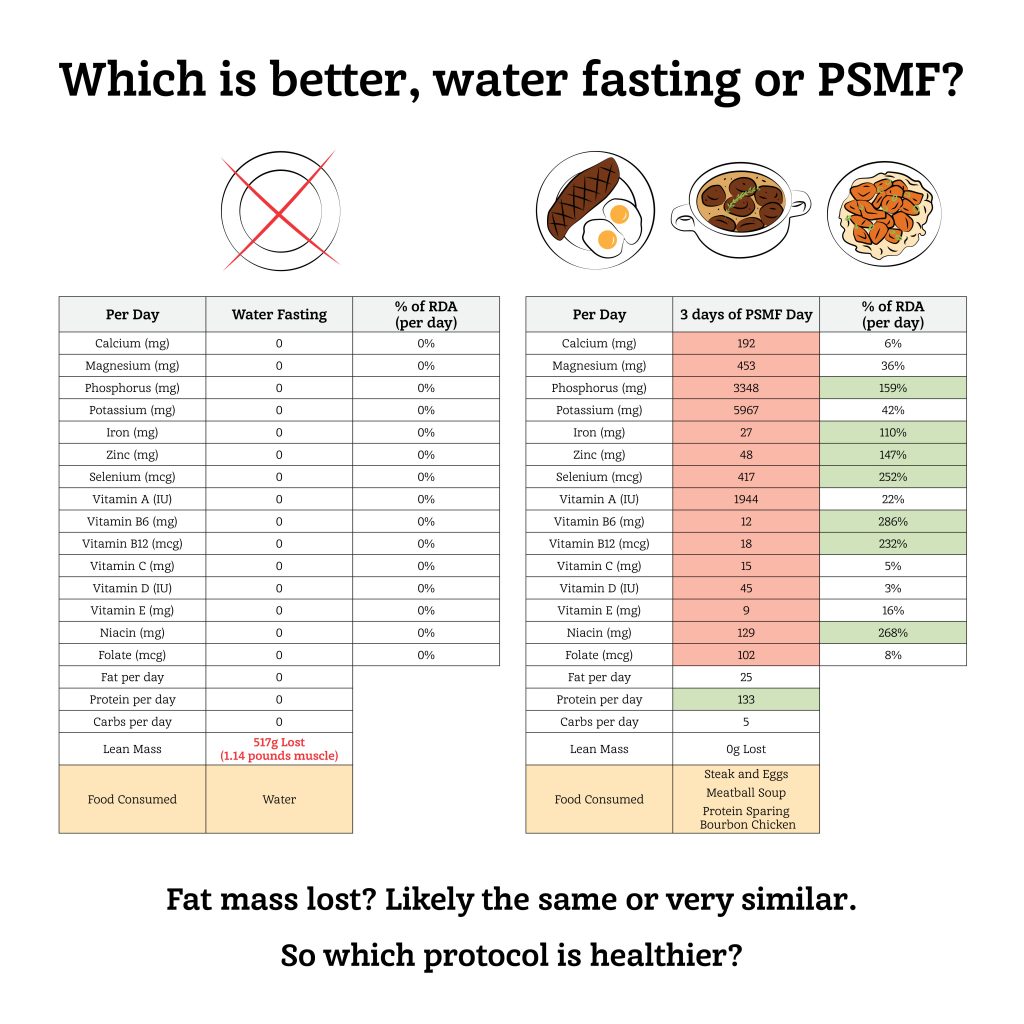 What I find really interesting is how people think that having a protein sparing modified fasting day is too extreme yet they will recommend fasting for days or only eat every other day. Eating the most nutrient-dense food and just enough to help maintain lean mass is much less extreme than eating nothing.

To learn more on starvation mode and how much fat you need, check out our YouTube Video with Dr. Ted Naiman!

Every Saturday at 11am central, we have a LIVE YouTube video that you can join and get your questions answered!

I love waking up to phone client emails like this!
“Hi Maria – One month of pretty strictly following macros calculated YOUR way (higher protein, lower fat because I’m getting fat from my body, total carbs) and I’m down 10lbs and I got my period today, which I haven’t gotten since last summer!
Thank you.” Lauren 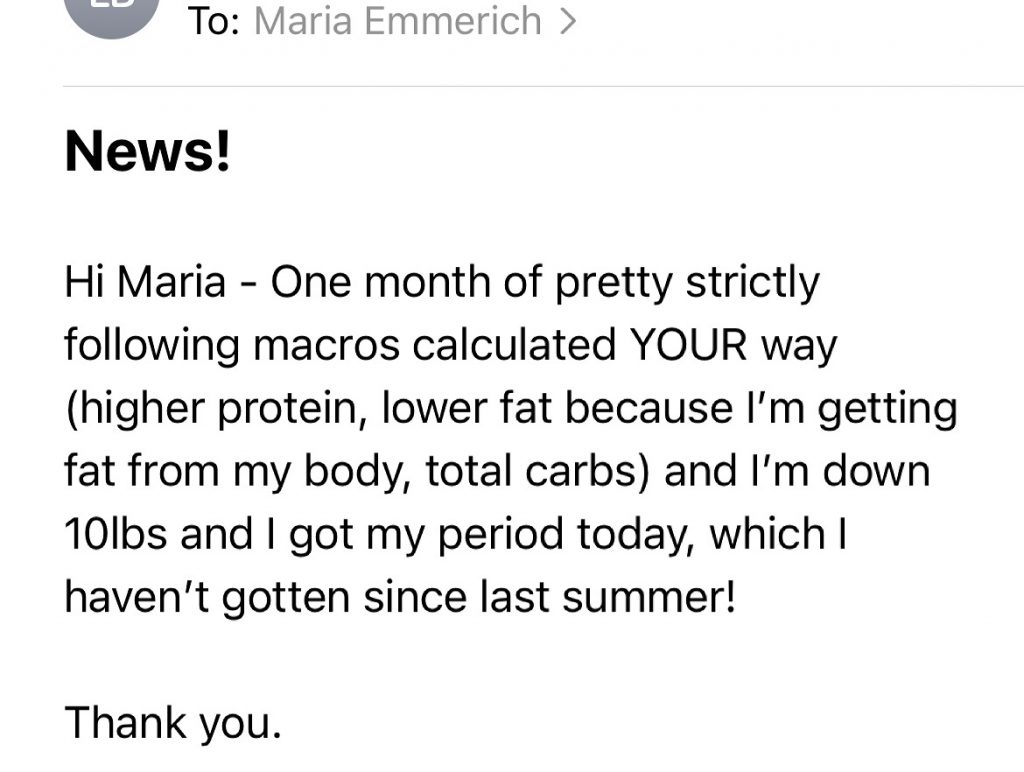