In the first post (located Here) we talked about the myths about Cholesterol.  In this post I am going to do my best to take a very complex issue (something I guarantee about 95% or more of Doctors don’t know) and explain it in an easy to understand way. Lets take a look at how Cholesterol is transported through the body and what causes Coronary Artery Disease (CAD).  In the final post on cholesterol we will talk about what you can do to reduce your chances of getting CAD.

How is Cholesterol Transported?

Cholesterol (lipids) needs to get from point A to point B in our bodies.  There are two types of substances that travel through our blood stream.  Hydrophilic and Hydrophobic.  Hydrophilic substances can travel in the blood without assistance because it is not repelled by liquid (like salt or sugar which dissolves in water).  Hydrophobic substances need a transporter in order to travel in the blood because they are repelled by liquid (like oil which is repelled by water). Cholesterol is hydrophobic which means to travel around the body it needs a carrier. That carrier is a protein molecule called apoproteins. Once they are bound with cholesterol they are called apolipoproteins (apo).  There are two main classes of apo’s, apolipoprotein A-I (apoA-I) and apolipoprotein B (apoB).  Almost all apoB in our body is found in low-density lipoprotein (LDL), while most apoA-I in our body is found on high-density lipoprotein (HDL).But this all deals with the surface of the lipoprotein molecule.  If you think of this molecule as a ship, this is all dealing with the surface of the ship.  But what about the cargo?  Remember, these ships are serving as cargo carriers for the cholesterol lipids (both on the surface and inside).  Something that is important is the ratio of lipid-to-protein which determines its density.  Something with high density is heavier for a given volume than something of low density.  A cubic inch of Lead will weight much more than a cubic inch of Styrofoam.  Remember this chart from part 1 on cholesterol? 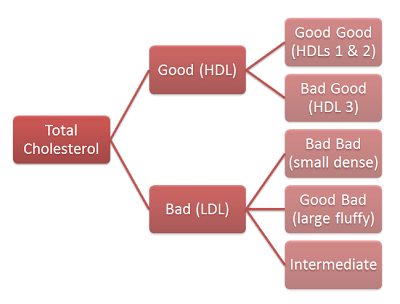 This chart shows the rough breakdown of the different cholesterol particles.  Another way to look at this breakdown is based on the following groupings.  There are five main classes:

Now look at this table:

Note that ApoA lipoproteins (HDL) are tiny compared to ApoB lipoproteins (VLDL, IDL and LDL).  This figure is not to scale so the difference in size is actually much greater than shown.  As you move in size from larger to smaller, the amount of triglycerides (TG) goes down and protein goes up (in relation to the total volume).

Cholesterol transportation goes both ways.  It travels from the gut and liver to our cells (muscles and fat cells for energy, cell repair, etc).  It also travels back to the liver, primarily from LDL.  So most of the cleaning up of cholesterol (returning it to the liver) is done by the supposed “bad” cholesterol (LDL).  The problem is, sometimes LDL can penetrate and deliver it’s cholesterol to our artery walls.  This is what we don’t want to have happen.  It is the ApoB particle that drives the cholesterol into the artery wall and 90-95% of ApoB particles are LDL.

The basic process is the LDL particle (LDL-P) crashes into the artery wall and delivers it’s cholesterol.  This stimulates an inflammatory response and our immune system kicks in and tries to fix this inflammation by removing the cholesterol from the artery wall. This immune response actually creates a space for more LDL-P to be retained.  Sort of like cement holding them in.  More and more LDL-P enter the space being created by the immune response.  Eventually, through more retention of LDL-P and advanced immune response, not only does the artery narrow, but a cap of tissue forms which is known as plaque.  Most heart attacks occur when a piece of this plaque breaks off and blocks blood flow.

So what causes the LDL-P to attach to the artery wall?  The main reason is when there is damage or inflammation. This inflammation is primarily due to oxidative damage or oxidation.  This oxidation could be in the artery wall (lesion), causing an immune response and thus the build up of white blood cells and LDL particles in the cavity that is created.  There can also be oxidation of the LDL particle itself.  Studies have shown that oxidated LDL cholesterol is 8 times stronger a risk factor for CAD than normal LDL.

We will break down in our next post how we can reduce these causes of oxidation and inflammation.

A Couple Notes about Testing and Variability in Levels:

In one person, studies have shown that with no change in diet or lifestyle, the total cholesterol can vary by about 35 points up or down for no reason at all.  HDL can vary up or down about 9 points.  LDL by 30 points.  The ratio of Total/HDL up or down by 0.8.  Triglycerides (TG) about 40 points.  This means a couple things.  You need to see fairly large changes in your numbers to conclude that something has changed.  Second, a single test doesn’t give you the whole picture.  You need several tests to see what your average level is.  So you could get tested today and have a total cholesterol of 200 and go back in tomorrow and have a level of 235 (or 165) and that is a totally normal variation.

Another important point is that when you are losing weight, your cholesterol levels will be skewed until you settle at a new body weight (cholesterol release into blood from fat cells).  So testing cholesterol right after losing significant weight will show higher levels until your weight has settled.

Another example is when you have non-alcoholic fatty liver disease and you change your diet to correct this, the lipids and cholesterol stuck in the liver will be release into the bloodstream and thus raising your TG and LDL numbers.  But this is a good thing as your liver is release them to heal and over time the levels will go back down.

How to Determine your CAD risk

What the latest science has shown is that ApoB or LDL particle (LDL-P) is the best indicators of metabolic syndrome (and thus CAD risk).  So what is important is the number of LDL particles not the amount of cholesterol contained in them (LDL-C).  (source) 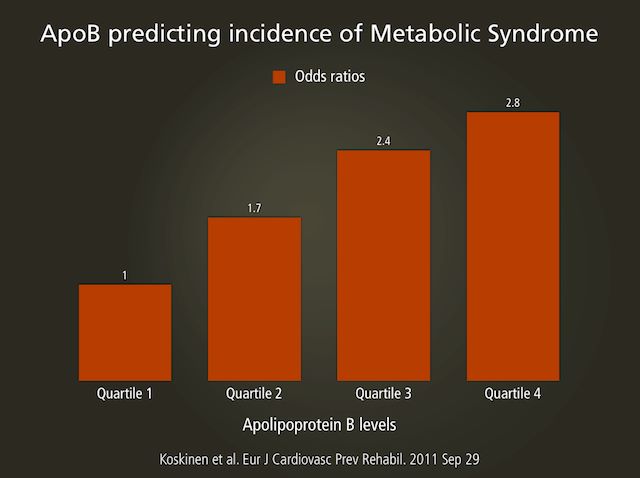 It is sort of a probability game.  The more LDL particles there are, the higher the chance they will crash into the artery wall and deliver their cholesterol.  The LDL particle number (LDL-P or ApoB) is the best predictor of risk for CAD. Some statements have been made about the size of the LDL particles as being an important factor in determining your risk for CAD (small dense particles due to oxidation are bad, large fluffy good), but the latest science (within the last couple years) shows that this is a secondary factor.  The LDL-P number is more important and only when LDL-P is high does the size become important.  Take a look at this graph from Quebec Cardiovascular Study, published in 1997, in Circulation.

There are several methods for measuring cholesterol, but I will not go into detail about the all of them (THIS source does it much better than I would).  However, let’s look at the one test that is the most important.  The best measurement and only one that actually directly counts theLDL-P is nuclear magnetic resonance spectroscopy or NMR for short (called NMR LipoProfile).  Here is what an NMR report looks like.

What is important to note here is that the traditional LDL cholesterol (LDL-C) of traditional tests given by most doctors today isn’t the same as LDL particles (LDL-P) and doesn’t necessarily correlate to LDL-P.  In other words if your LDL-C is low, your LDL-P could still be high (more particles which are smaller and contain less cholesterol).  This is particularly true for those with metabolic syndrome and diabetes. (below is from HERE with my own text to help easier understanding of this complex issue) 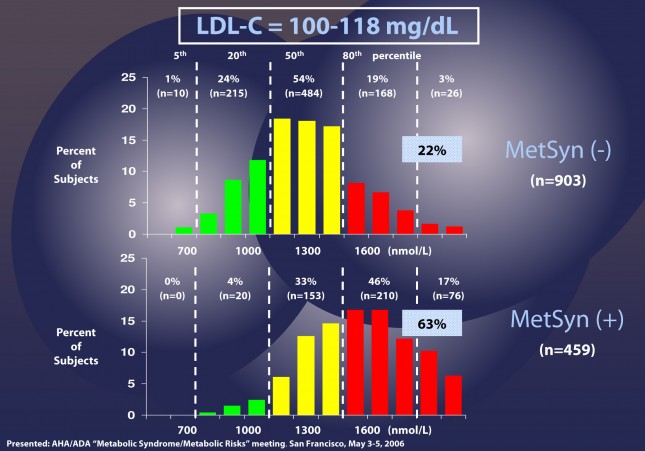 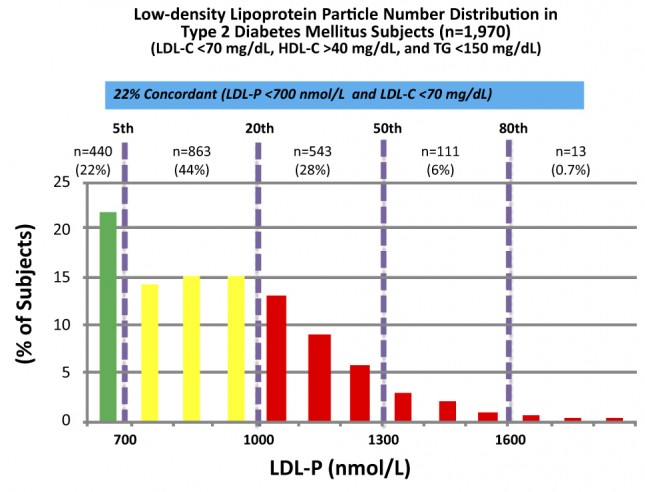 The above data was collected from nearly 2,000 patients with diabetes who presented with “perfect” standard cholesterol numbers: LDL-C less than 70 mg/dL; HDL-C greater than 40 mg/dL; TG less than 150 mg/dL.  But only 22% of the time did the LDL-P (the real indicator of risk) equal the LDL-C levels.  Remember that LDL-C less than 70 mg/dL is considered VERY low risk (5th percentile).  But with LDL-P the real risk for 35% of these patients was above 1000 nmol/L (above 20%) and 7% were HIGH RISK.  When you do this analysis with less stringent LDL-C criteria (LDL-C less than 100 mg/dL) the number of patients in the high risk group is even higher.  This shows that for many people with metabolic syndrome or diabetes, the LDL-C numbers inaccurately report their real risk for CAD.

To summarize this very complex issue, LDL particle number (LDL-P) is a great indicator of Metabolic syndrome and is the most accurate predictor of CAD risk, not the traditionally used LDL-C. The best test for LDL-P is NMR LipoProfile.  There are many other markers that can give you information about what is going on in the body (Triglycerides, Ratio of Total cholesterol to HDL, Total HDL levels, etc.) but none of them on their own accurately predict the risk of CAD except LDL-P.  Also, non-alcoholic fatty liver disease is a very good predictor of future CAD (again linking it to inflammation).

But, by far the best predictor is your inflammation.  If you have very low inflammation, the cholesterol numbers don’t really matter much in most cases.  Remember, cholesterol is the firefighter coming to put out the fire (inflammation).  Inflammation is what causes CAD. In general we look for things like A1c (ideally 5 or less) and Triglyceride to HDL ratio (2 or less, ideally 1 or less) to know how much inflammation you have.

In the next post (Located HERE)we will talk about how to reduce your LDL-P and your risk of coronary artery disease.