I can’t believe it has officially been 3 years since bringing the boys home. I can truly say that these boys were meant for us! Our story has so many bumps along the way that there was a time when Craig and I thought we were never meant to be parents. Craig lost his job which threw a huge wrench in our plan; and I’ll never forget the day after our baby shower, when we received a phone call that the baby we were placed with died of malaria. We were quickly referred another boy, Kai. He was found in front of a church at 2 weeks old and when we got the photos, he immediately stole our hearts. So this was the path that was meant to be for us, just like Craig’s job loss that gave me the courage to start this business.  It all happens for a reason. 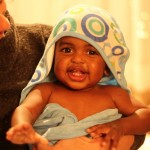 I recently read Yes, Chef: A Memoir by Marcus Samuelsson who is an amazing chef. He too was adopted from Ethiopia and writes about his memories of his journey. My favorite part of the book is when he writes about having to go into the big scary bathtub! My boys would cry hysterically at bath time for the first month of being home but soon enough they begged to play in the water. Baths were not something enjoyed in Ethiopia, many times the water was completely shut off for very long periods of time.

It was quite a journey! We traveled to Ethiopia in May 2011 to sign court papers and to meet the boys for the first time. It was an amazing but bittersweet trip. The feelings of meeting the boys for the first time were indescribable, they put Micah and I in a tiny dark room upon meeting and I held him while he cried for about 2 hours. I decided that I was going to “break the rules” and go outside to play. I found a donated basketball and started playing catch with him (the older Ethiopian men at the foster home laughed at me because I was bouncing the ball with my hands and they play soccer… a basketball meant nothing to them:). Within about 5 minutes of playing Micah was hooked on me; I don’t think he ever had attention like that from anyone.

The days went by in a blur; nothing to do but to hold and play with our boys. Having to leave them was very hard. Craig mentioned it was like being in the delivery room and seeing your son for the first time, holding him and getting to know him and then the nurse saying, “OK, we will take him now and you can come back in 4-6 weeks to take him home”. Sadly, we had to leave them behind not knowing when the U.S. would let us travel again to bring them home. 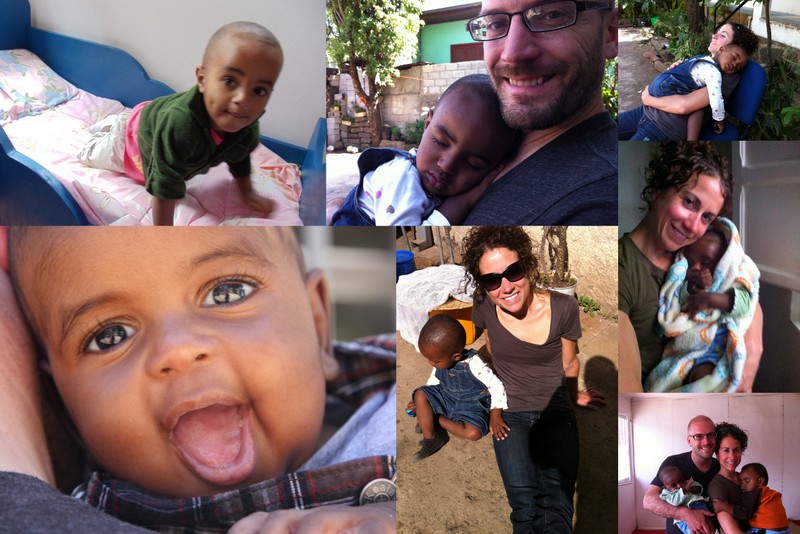 We hit some more ‘bumps in our journey’ as our paperwork was marked as “Not Clearly Adoptable” and was sent to Nairobi for review. This caused another long delay. We expected to bring them home in 4-6 weeks, but it ended up over 6 months!  Craig has told me that it is a good thing we didn’t know it would take 6 months when we first met them as it was hard enough leaving them thinking it would be 4-6 weeks!  We didn’t get the approval until November 2011 and our official embassy date was set for November 21st.

This started the craziest few days of my life. We had 5 days to get all the arrangements made, hotel, airlines, drivers, etc. There was also the additional wrinkle that only Kai’s case was approved and we were waiting on an interview with Micah’s birth mother that was set to happen on Friday while we were flying out to Ethiopia. So when we got to the hotel we didn’t know if we would be bringing both home or just Kai. We were to receive an email from the US Embassy telling us if the interview went well and if we could bring Micah home too. The minute we got to the hotel, Craig ran to the office center where you could buy access to the internet.  It had just closed.  Craig pleaded with the women and she let him in to check his email. The email was there. The interview had gone well and Micah was cleared to come home!

Every month that went by, I feared that Micah wouldn’t remember the woman who played ball with him but when we jumped out of the taxi cab, he ran into my arms (see video). This video is priceless to me.

Kai, on the other hand, was the opposite. He loved cuddling with us on our first trip to stay with him, but when we came back he cried whenever we held him. It totally broke our hearts. Why we had to be apart so long seemed so unfair. 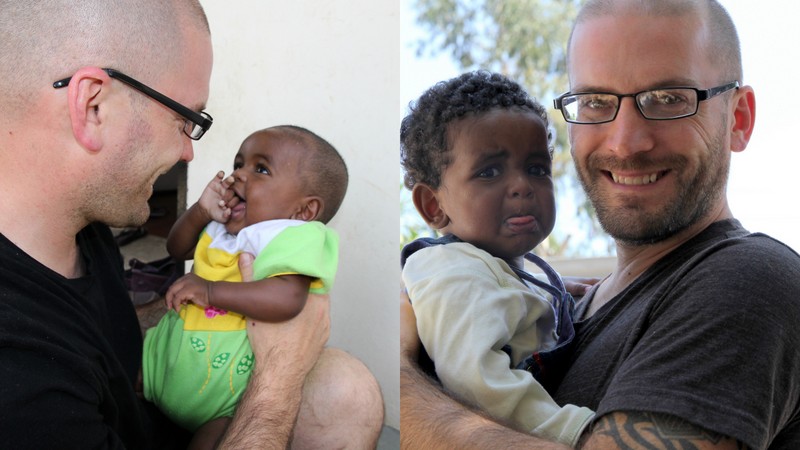 We were only in Ethiopia for 4 days. The boys were so good despite all the new and unfamiliar things that happened to them on the way home. First off, as you can see in the above photo, it was only the second time they had ever been in a car! Our car had no seat belts, let alone car seats (and the driving is SUPER scary! Cars and buses everywhere, chaos!). So as we pulled out of the gated foster home, Micah cried the whole way to the U.S. Embassy. I can’ imagine how much his view of the world grew in just minutes.  He had spent almost a year in the foster home in this little walled courtyard (about 20 feet by 20 feet).  I will never forget the look on his face as we pulled out.  His eyes were as big as saucers.

As we sat in the waiting area at the Embassy, Micah continued to cry and Kai decided it was time to fill his diaper. They both had giardia, which makes for “blow out” diapers. Fun when traveling half way around the world!  So Craig left with Kai and I sat with Micah while I felt that there were hundreds of eyes on me judging me for not being able to comfort my new toddler.

The flight home was a different story, the boys were so over-stimulated, they slept almost the whole way home (as you can see in the photo, Micah made good use of his seat!). As for Craig and I, we didn’t sleep for the 48 hours of travelling from picking them up at the foster home to getting home! At least we weren’t sick with giardia this time like we were on the first trip back to the U.S.  Yikes!

Once we arrived in Minneapolis, we had lots of new and scary adventures for the boys. As we strapped them into their car seats they screaming started. Another new thing for them. I’m sure they wondered why we were no longer holding them like we had been for the last 4 days straight. I tried to hold their little hands to comfort them (as you can see in the photo above) and their tears finally stopped after 40 minutes. BUT, then we picked up our puppy, O’Hana, from the kennel. Dogs were not considered friendly in Ethiopia, they were mostly used for protection and the boys were extremely scared of her.

We arrived home and kept O’Hana downstairs. It would take almost 2 months for Micah to be OK with O’Hana walking around the house.  It was 2pm the day before Thanksgiving and I was ready for bed! I was exhausted, but we tried to feed them and of course our food was totally different than what they were accustomed to, so the crying started again… So we tried a bath. The bath tub is a scary place for the first time, and the crying started again. At this point, I haven’t slept in 2 days and I fell into Craig’s arms and said “They hate me!” Craig is my hero; he held me tight.

I don’t mean to make this story sound negative, because it isn’t. I just wanted to tell the truth of how it all unfolded. Adoption is a true blessing, but taking a child away from everything they have ever known and fly them half way across the world with people they barely know would be very traumatizing for an adult much less a child. This was now Micah’s fourth home in his short 27 months of life.  But the most important thing of all, it is his last.  Our “Gotcha Day” was a yanking of fours lives together in a 2 day chaotic sprint.  The rest of our lives together is our marathon and for that it was all worth it.

The boys and I crashed at 5pm! At 3am, Kai and I were up and the new day started. With sleep and food in my belly, I felt amazing. I held my new baby boy in my arms, rocking him while I fed him a bottle. Life never felt so complete. It is amazing how well the boys adjusted in just one year. They now love our puppy, the bath tub, our food, and they are even getting used to playing outside in the cold! They are amazingly good riding in the car seat or stroller. We could not have asked for two more perfect children. It was a journey that took over 5 years to make us a family. But the path along the way has proven to be the path that was meant to be for our family and for that we feel truly blessed.

It is amazing how you forgot the trials and challenges we went through until I look back at the photos. It seems like they have been with us forever.

One of Micah’s first phrases was “Micah, Kai, Daddy, Mommy, Hana.” O’Hana is our dog (O’hana means “family” in Hawaiian). He still repeats it all the time.  Family.

Comment below on what you are grateful for today! 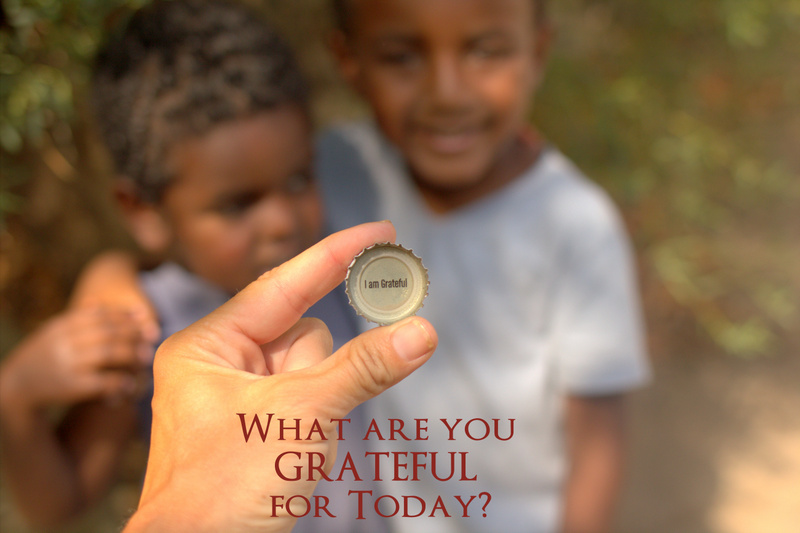